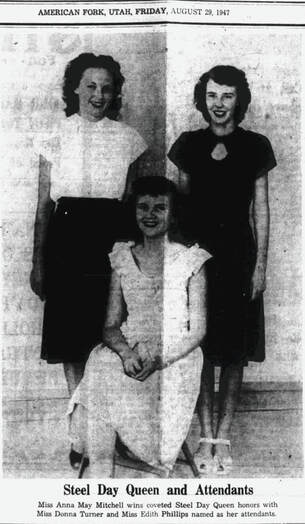 ​Anna May Mitchell Miller was crowned Steel Day Queen in 1947 and is the longest reigning Steel Day(s) pageant winner. Anna was 17 years old when she was crowned Steel Day Queen at an Open Air Dance Hall named The Latona. Altabank is now where The Latona once stood. At the time, different businesses sponsored each contestant, and she was sponsored by Robinson Sporting Goods. The night it was announced she had won, she was asked to say “a few words”. She was overwhelmed with surprise and joy, so a few words it was. “I’m happy and proud to represent this great city and the people I love. Thank you for voting for me.” She was filled with emotion and excitement at the thought of representing the city she loved then and still does.

Anna was the youngest child born to Leland Richard and Oma Mitchell. She was born in American Fork and has lived here almost her entire life. Her father was an Industrial Arts teacher at American Fork High School and was also the Building Inspector for American Fork city and built many homes here in town. Richard started the Mitchell Farms and Orchard, which was well-known for its apples but also supplied many other cities with fruits and vegetables. The last of the orchard was sold about two years ago to make way for a housing development.
When asked what Steel Days means to her, Anna responded, “Steel Days is an abundance of fond past memories. I have rarely missed this city celebration! I love attending the parade, the art exhibit, the flower show, the carnival, and watching the fireworks. Our city, through the years, has always made Steel Days an event to look forward to and a time to remember! The celebration was named after Geneva Steel - a booming industry for many years. American Fork is a city to be proud of, and I’m proud to call it home.”

Anna says she has so many favorite Steel Days memories. “The year I was Queen was an exciting year for me. We had a Queen’s luncheon for all of the pageant contestants - a fun tradition that still exists today! The Steel Day Queen was chosen by the public through buying votes. A car was given away during the Variety Show, and the money raised from buying votes helped purchase that car. I was privileged to draw the name of the winner, which was a fun opportunity! The Queen’s float was featured in celebrations throughout Utah. It was 1947 and was the Utah Centennial Celebration, so we felt lucky to take part in the city’s parade!” Anna added, “The attendants and I invited Governor Maw to our Steel Day celebration that year. We were also taken in a small airplane and flown around the counties. It was my first time in an airplane, which was very exciting! I was also invited to participate in the ZCMI fashion show. I had the opportunity to model their clothes, which I loved. I had the experience of touring the Geneva Steel plant. American Fork city gave me many opportunities to participate in the community. These, and many more, are memories I cherish. They filled my experience as Queen with so much excitement.”

It is our honor to recognize Anna and her family’s contributions to the community of American Fork and to the city. When told that her story was going to be part of this year’s 75 year anniversary celebration, Anna said, “I’ll always treasure my past memories. Being the Steel Day Queen for American Fork was my pleasure and an honor.”
Proudly powered by Weebly