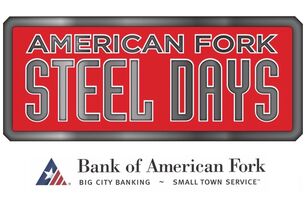 SPONSORED BY ​BANK OF AMERICAN FORK
History of Steel Days
Sponsored by Horrocks Engineering
For over 100 years the city of American Fork has gathered together to celebrate its history, achievements, business community, and residents. This annual celebration is now known as Steel Days, but throughout the years the festivities have also been called Timber Day, Liberty Day, and Poultry Day.

TIMBER DAY
Timber Day was an all-day picnic with music, entertainment, and games. It began around 1865 and was held in a grove of trees known as “The Timbers.” Families brought food prepared especially for the occasion, laid it out, and shared it with others. There were activities for young and old, with a horseshoe competition, foot races, and ball games. Timber Day was observed until approximately 1904.

LIBERTY DAY
Liberty Day had no set date but alternated between July 4 and July 24 to mark the nation's birth date along with the residents' pioneer heritage. The picnic in the park continued in Central Park, which is now known as Robinson Park. There was an organized parade with decorated flatbed horse-drawn wagons. When automobiles were introduced, they were decorated and driven from one end of Main Street to the other. Until 1910, the city's roads were dirt and gravel, increasing the challenges of such travels.

There was usually a theme chosen for each year's celebration. In 1925, it honored the various states of the United States. There was a baseball game, dance, and fireworks. The tradition of shooting off a cannon from the cemetery hill early in the morning marked the start of the day's events.

POULTRY DAY
In July 1927, Poultry Day began with a modest celebration. It was expanded in 1928 with a town banquet instead of the previous picnic. There was also a parade, ball game, races, carnival, and a program and dance. Mary Pulley was the first Poultry Day Queen. During the banquet, a server spilled a pot of hot chocolate in Mary's lap. She simply wiped it up and went on with the day.

The Sunrise Salute, or firing the cannon, continued at daybreak. There was a free lunch with 10,000 chicken sandwiches served. There was a flower show, art show, and an all-day movie showing at the Cameo Theater.

There were no celebrations held during the years of the Depression. Poultry Day was held in July 1941, but with the attack on Pearl Harbor in December, all American Fork celebrations were eliminated during the war, with the exception of a small neighborhood party in 1944.

STEEL DAYS
Since 1945, Steel Days has been American Fork's traditional celebration. Then-mayor O. De Vere Wootton decided Poultry Day no longer reflected the city's economy. The newly constructed Columbia Steel Mill brought many newcomers, who made an impact on housing, utilities, traffic, and commerce. The mill became the largest employer in Utah Valley. Two individuals suggested “Steel Day” after a request for ideas for a name for the celebration. Steel Day was selected and was celebrated on Labor Day.

In 1946, Steel Day was a full day of events, similar to Poultry Day. The American Fork Chamber of Commerce was also established that year and was involved in the planning of the Steel Day events. The parade featured numerous floats decorated for and by local businesses. Bands came from Tooele, Salt Lake City, Nephi, Payson, Lehi, Pleasant Grove, and Provo. The parade was presented twice for many years - at 10:00 a.m. from 500 West Main Street to 500 East and then at 6:00 p.m. when the route was reversed.

The duration of Steel Days expanded from one day to three days, then four and five days, and eventually to ten days. Currently, Steel Days runs for eight days and includes over 30 events. ​

Vehicles were also an important part of Steel Days history. In 1961, the Jaycees (Junior Chamber of Commerce) held a drawing for a Ford Falcon. However, it did not prove to be enough of a draw and there was a $1,500 deficit after the ticket sales were tallied. The next year, the car was a sporty Thunderbird and ticket sales increased dramatically. The evening program featured a singing group from Ogden, "The Osmond Brothers,” complete with Donny, who even then stole the show.

In 1963, the city used a smaller approach, calling it “Community Day.” It included a pet and hobby show and a short evening program with fireworks. Despite its success, there was no celebration in 1964 or 1965. Civic clubs apparently did not want to take over managing the celebration. There were, however, abbreviated queen pageants held.

In 1966, a new committee was formed, and it was again a larger celebration that was now held in July. They also resumed using the Steel Days name. In the late 1960s, the American Fork Boat Harbor was developed and boat racing was added to the list of events. In 1968, the Big "City of Fun" Special Bargain Carnival made its Steel Days debut.

The festivities remained mostly the same for the next several decades, with several of the events being part of the festivities every year and others being added or eliminated. In 2003, events marking the city's 150th birthday were incorporated into the celebration, even though they were held earlier in the summer.

In 2018, the American Fork Chamber of Commerce again became an integral part of the Steel Days celebration when it contracted with American Fork City to manage and operate Steel Days, a role that it is proud to fulfill in 2019 as well. This year we have added the Smoke & Steel BBQ Competition, a Kids Splash Night, and Pickleball and Spikeball Tournaments to the event line-up. Whether this has been a family tradition for several years or you've never celebrated with us, we invite you to come and enjoy all of the fun that Steel Days has to offer and make some memories of your own.
Proudly powered by Weebly