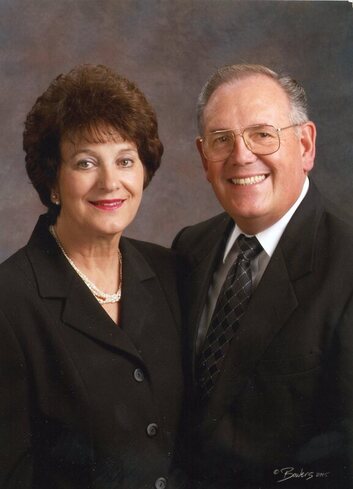 Alan and Annette Anderson will be honored as the Grand Marshals of the 2022 Steel Days Grand Parade on Saturday, July 9, 2022. The parade will begin at 9:30 a.m.

Alan Anderson’s family has served the community of American Fork since 1866, caring for those who have passed away. The Anderson family also provided the ambulance service for this community until 1959.
​
Alan attended the Harrington School and then the old high school on the hill, which included both junior high and high school programs. He is known by his classmates as an amazing saxophone player and was the Drum Major for the American Fork High School Marching Band.

Alan graduated from the San Francisco College of Mortuary Science with the Mu Sigma Alpha Award. He then returned to American Fork to be the fourth generation serving at the Anderson & Sons Mortuary. He finished his Bachelor’s degree at Brigham Young University.

Alan went on an LDS mission to Brazil. He was later called as first counselor in a Bishopric, then served on the High Council. He was serving as the Executive Secretary in the American Fork North Stake at the time he and Annette were called to preside over the Rio de Janeiro North Mission. Upon returning from Brazil, they were called to serve at the Provo, Utah Mission Training Center.

The Staff at Anderson & Sons have won the coveted “The Pursuit of Excellence” award issued by the National Funeral Directors Association for 10 Years, which gave them a position in that association’s “Hall of Fame”.

​Annette was born and raised in Salt Lake City. She is a graduate of the University of Utah with a major in English and a minor in music. She sang with the Riverside Church Choir in New York, the Tabernacle Choir, and studied at the opera workshop in San Francisco. She sang with the American Fork Civic Choir for many years and was the director for three years.

Annette taught English and reading for three years at schools in the Salt Lake Valley and sixteen and a half years at American Fork Junior High. She was listed in the printed publications Who’s Who Among America’s Teachers, 1994 and Marquis Who’s Who in America, 2021-2022.

Annette served as the mission mother when Alan was the Mission President of the Rio de Janeiro North Mission from 1999 to 2002. She is also the author of two published novels - Wilderness of Mirrors and The Waterfall. She writes under the pen name of Helen Baker.

​Alan and Annette are the proud parents of five children: Alec, Angela, April, Andrew and Adam, all of whom received their undergraduate education in public schools in American Fork. Alec, Angela and Andrew are licensed funeral directors working as the fifth generation at Anderson & Sons Mortuary, April is the Assistant to the Provost at Dixie University, and Adam is a chiropractic physician practicing here in American Fork.
Proudly powered by Weebly